History of CAPTCHA - The Origin Story

Born to save humans from the bad bots on the internet, got maddening with evolving technology, then became a chore that we just couldn’t do without. This is the origin story of the worldwide webs’ most overlooked guardian, CAPTCHA.

Bots Take On The Fight

It all began in 1997 when the search engine AltaVista was being abused by the automated submission of URLs into its library. The free "add URL" feature was crucial for AltaVista since it broadened its search coverage. Yet, some users have abused this feature by automating the submission of large numbers of URLs in an effort to skew AltaVista's ranking algorithm.

To distinguish whether the submission is made by a genuine human user or an automated bot, the Chief Scientist of AltaVista, Andrei Broder, and his colleagues developed an automated filter system that randomly generated an image of printed text which machine vision (optical character recognition, OCR) systems could not read while humans could. The system was so successful that after it'd been deployed for over a year, it had reduced the number of spam URLs by 95%. This is the first known deployment of an automated system to tell a human from a machine.

Bot threats were not only a problem for AltaVista. In September of 2000, Udi Manber of Yahoo described this “chat room problem” to researchers at Carnegie Mellon University. Bots were joining online chat rooms to spam advertisements, which damaged the ecosystem considerably.

Luis von Ahn and his colleagues have developed the GIMPY CAPTCHA, which picked random English words and rendered them as images of printed text under a wide variety of shape deformations and image occlusions. The user was asked to transcribe a number of words correctly. A simplified version called EZ-GIMPY, using only a single-word image was installed by Yahoo and was used in their chat rooms to restrict access to human users only.

Although both AltaVista Team and Carnegie Mellon Researchers have claimed to be the first to invent the CAPTCHA, the term was coined in 2003 by Luis von Ahn and his colleagues.

What does CAPTCHA really mean?

Turing test is a method of inquiry in artificial intelligence where a computer has to convince a human that it's a human. A reverse Turing test on the other hand is a human convincing a computer that it is not a computer. If you write a program that generates such a test automatically on the internet, then you got yourself the CAPTCHA: Completely Automated Public Turing test to tell Computers and Humans Apart.

CAPTCHA saved us from the bot threats at the time, what we didn’t know, however, was that this was just the beginning of the war of machine against machines where evolving bad bots and CAPTCHAs took it to the next level, find out more on CAPTCHA Evolution | All Three Generations Explained! 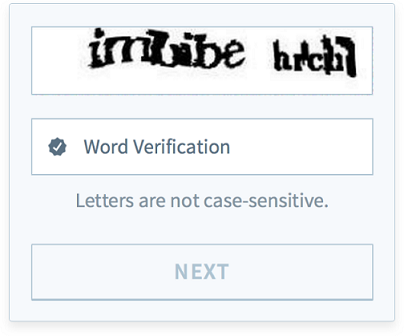 Why Traditional CAPTCHA Cannot Satisfy the Needs of Enterprises
As text-based CAPTCHA could be easily cracked by machine, an...